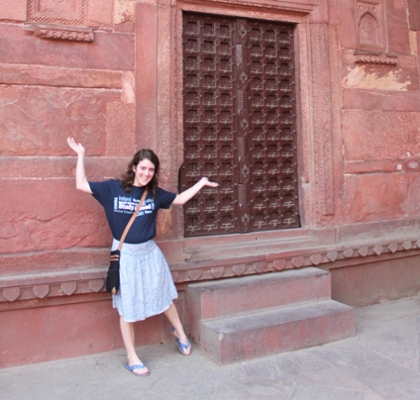 Location:  Delhi, Jaipur, and Agra, India
Learn more about this program »  and Check out her travel blog »

I plan to graduate in May, sit for the CPA exam this summer, then start as a federal tax staff at a public accounting firm on the north side of Indianapolis this fall. I know, I know - it sounds like a snooze fest to you. But for me, I'd say it's a passion, something I enjoy and that I've been gifted at doing.

The main focus of our trip abroad - the "study" portion of the study abroad trip, if you will - were the business visits. Each company we visited was unique with its own culture and proved invaluable in increasing our understanding of the cultural differences encountered when doing business in India. Below are the highlights from a few of the business visits we did.

Harley Davidson: Most intercultural business studies emphasize businesses that attempt to expand internationally. Many of these companies fail because they neglect to take into consideration cultural differences in those international markets. Thus, intercultural business experts often advocate that companies alter their culture, key selling points, or other parts of their core values. Harley Davidson is the epitome of a company that has succeeded in international markets despite continuing to sell an Americanized brand in foreign cultures. As purveyor of a premium product (i.e. a product that sells at a higher price than similar products with other brands), Harley remains dedicated to its core marketing strategy. To use plain English, Harleys sell because of their "coolness" factor. Even in India Harley has been successful selling the same all-American brand that customers have come to know, love, and even idolize, in other parts of the world.

Eco Car Rental: On our way to Jaipur, we stopped at the IU Gateway Office and had the opportunity to speak with Rajesh Loomba, managing director of Eco Car Rental. This is a family-owned business that Rajesh grew up working in. The one thing that stuck with me from that discussion was Loomba's statement that it would be incredibly difficult for India to continue to emerge as an economy when such a large percentage of its population was trapped in poverty. He demonstrated true commitment to social responsibility, even though it may not be as "cool" in India as it is in the States.

Textile Factory: "Why don't you have girls running the sewing machines?"

"It is more physically challenging. We give them the easier jobs. Also, they would not feel comfortable working the machines, because it is man's work."

The question asked by a member of our class and response from the director of marketing were revealing. It made me think about cultural stereotypes and how shifts in cultural mindsets are accomplished. Don't misunderstand me. I'm not using this as an argument either for or against feminism. However, in every culture we place expectations on individuals due to their age, gender, social status, or looks. And while we can view such expectations as wrong and wonder how on earth people in another culture could continue a certain mindset (such as the caste system in India), cultural shifts are incredibly difficult to set into motion. In India, it might be that women do not apply for certain jobs because they would be thought of as strange. So, in a sense, it's true; they honestly don't want those jobs anyway. They're scared what others would think, but at the same time they don't want to do it because they grew up believing they couldn't. In a way, you can't really separate a desire to continue your culturally appropriate role from fear that trying to change boundaries would be frowned upon. In the United States it may be stereotypes about looks. We choose standards of beauty that Americans are supposed to uphold. In one sense, others make us feel unattractive if we don't meet those standards. In another sense, we ourselves want to reach certain standards of beauty. Again, can you really separate them? Cultural shifts have to start from somewhere deeper, from an outside force pushing us to think outside our realms of established thought and societal norms.

One word that comes to the forefront of my mind when I think about this trip is contrast.

India is full of contrasts, incredibly full of them. Tremendous wealth is often displayed in the face of extreme poverty. It was so stark that I would regularly wonder how the Indian people could be so accepting of it. How could they be proud of a magnificent wonder of the world such as the Taj Mahal when right outside crippled beggars or street vendors are struggling to make a living? But then I would again realize the hypocrisy in that thought, that it is not just the people of India who accept this. People all over the world are hurting and in need of help. Even in the States there is tremendous suffering, maybe not in the form of the extreme poverty you would see in India, but suffering nonetheless. Yet because we are used to seeing those types of suffering, sanitized against them, we find it more comfortable to remain self-absorbed and no longer care or seek to find ways to help others. It doesn't bother us as much because we become calloused against it. May the experience of new cultures never cease to bring us to greater realization of what we have come to accept as normal in our own cultures!