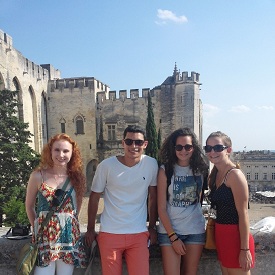 I am a French major, and I really wanted to study abroad before I graduate, and I needed a summer program because my nursing major does not allow me to take an entire semester abroad. This program gave me 3 credit hours towards French language, which I needed towards the major. Aix-Marseille Université (where you take courses in this program) places you in a course based on your French abilities, and you just take a placement test when you arrive.

“Although it was only a four-week trip, I had to speak French most of the time, so my speaking skills improved very quickly.Erin Connor

Going to a new country was really scary for me, but I made friends quickly, and everyone else was in a new place too. The rest of the students in the program were foreign as well. My main difficulties were finding my way around town and getting into a routine in such a foreign place. The people in southern France, though, are very friendly, so it is very easy to ask for directions and help.

The housing for this program at this school is very nice. Students get their own private room and bathroom (although it’s extremely small). The dorms were newly renovated this summer, so everything looks brand new. You have a desk, plenty of storage, and your own mini-fridge. The only downside to the housing I would say is that it is a long walk from the grocery stores and restaurants, but it is really nice. You can get internet in the dorm, but it is not 100 percent necessary, since you really should only be in your room to sleep! You live in the dorms with other students, mostly other foreign students there for the summer. The dorms are about a ten minute walk from the campus and about a twenty minute walk from downtown Aix.

In this program, you take a four-week course that is Monday through Friday for four hours each day. The content depends on your level in French. It is very intense while in class, but they do not assign a lot of homework, because they want you to see the city and be out and about while you are not in class.

Before going, I made sure I was familiar with the exchange rate (France uses the euro, and I think it’s about $1.35 per euro). I used all cash while I was there. When I arrived at the airport in France, I just found the first ATM I could, and took out about 300€, and did this about once per week. This way, I was only charged the ATM fee by my bank, and they also gave me their exchange rate. Food at restaurants in France is pretty expensive (you can expect to spend about 15€ on a sit-down meal), but at the grocery stores it is comparable to here. Since you get your own fridge in the dorm, I usually had breakfast and lunch in my room and ate dinner out.

Some Americans might think the French are not friendly or rude; this is very untrue. They are proud of their language, and just don’t like when people speak to them in another without asking first. The people in the south of France are very friendly, and as long as you begin the conversation in French, they can usually tell you are not a native speaker and will help you if you don’t understand. Sometimes, if they speak English (which many don’t, contrary to popular belief), they will switch the conversation to English. Overall, I felt very welcome, and had good experiences with the locals.

I wanted to learn another language to help with my nursing career, and this trip definitely helped improve my French skills. Although it was only a four-week trip, I had to speak French most of the time, so my speaking skills improved very quickly. In class, we also worked on writing and reading skills.

If you are thinking about studying abroad, but are unsure of taking a whole semester, or are worried about the cost, then a summer study abroad is a great option. The cost is a lot cheaper, and you still get credit for the course.